Writer and expert / Posted on

Since we last caught up with the OpiCure Foundation p/b OrangeSeal Gravel Team they have been in action at the Belgian Waffle Ride; this time in Hendersonville, North Carolina—aka “The Hell of the East.” Griffin Easter, the team’s lead rider, was looking to continue his run of success at the previous round and sponsored rider, Lucie Kayser-Bril, was again out to prove the power of the bicycle in supporting those with substance-abuse issues.

As you’d expect from BWR, the course profile was fearsome: the race covered 130 miles and amassed nearly 13,000ft of elevation gain. Unfortunately our dynamic duo were unable to complete a course recon, so every mile and foot gained would be a surprise to Griffin and Lucie. Though they couldn’t be sure what exactly was in store for them, as with any BWR event you can bank on there being a bit of everything, including rough gravel roads, tight-rooted single track, fast and twisty paved descents, luscious lakes, and no shortage of steep pitches.

GRIFFIN’S TALE FROM THE FRONT

Overall, Griffin put in another stellar performance to finish ninth on the day. However, as with any results sheet, where a rider’s name appears never tells the full story of the blood, sweat, and tears that went into to getting there. In such a competitive field—featuring pros from the road and various off-road disciplines, as well as form WorldTour riders—every position was hard won.

Things started out on the right foot for Griffin. “The legs were good, I felt strong on the climbs and I’d made the select front group,” he tells us. The front group was composed of some distinguished company, including Peter Stetina, the eventual winner; Nathan Hass, the eventual runner up; and Paul Voss, the eventual third-place finisher—to name a few. 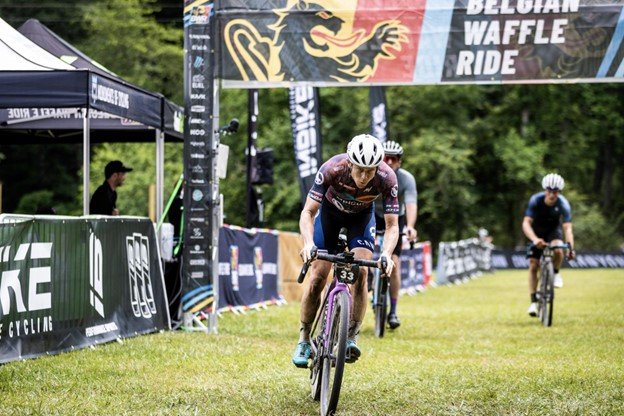 The seven-man group motored along at an infernal pace, for an amount of time that seemed to bend the laws of time and space. Things were going to plan, albeit “hellaciously” to use Griffin’s word, until mile 70. At this point, while descending a fast, gravel road, Griffin struck a rock and instantly punctured; to add to the dilemma the front rim was cracked. Griffin quickly came to the conclusion that, “Damn, that’s not a quick fix!” Heeding his own advice—more of that in our previous post—Griffin kept cool and calmly plugged and re-inflated his tire. Tire plugged, the chase was on! 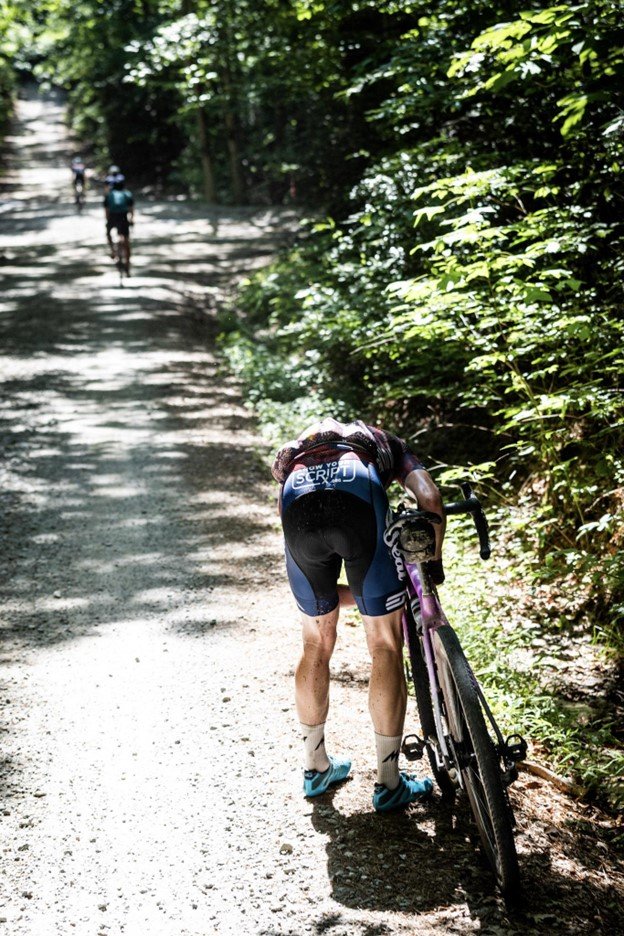 Of course, Griffin was feeling “very frustrated with my ‘rider-error’ and bad luck. All the work, all the dedication, all the time lost due to a mechanical mishap.” Not one to dwell too long on his misfortune, Griffin says he, “quickly snapped his head back into it.” Fortunately, shortly after he began his chase, Josh Burnett, a racer from New Zealand, zoomed past. Spotting an opportunity, Griffin glued himself to the Kiwi’s wheel.

Approaching the Big Barn aid station, Griffin spotted his team support, Cullen Easter and Sydney Berry. The sight of whom buoyed his spirits and strengthened his desire to push on. Firing up his legs, Griffin tackled the second lap with gusto. As the toll of the day began to take effect on the other competitors, Griffin and Josh ploughed on and soon began picking up the riders that had unceremoniously flown past them earlier. 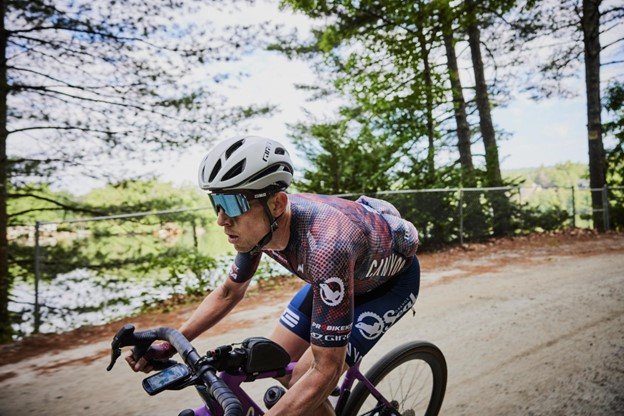 As they flew past the aid station, Griffin received one last rallying cry from his brother, Cullen: “Just keep rolling, you are still in the points!”  With this reminder, Griffin that despite no longer being at the pointy end of the race, for the overall series every position still counted.

For the finale of the race, Griffin recounts, “Feeling one last boost of energy course through my body.  Riders would come and go the remainder of the course, including myself.  However at the end of the day I finished and came across the line in 9th place.  If you’d have asked me after that first double holed puncture where I’d finish, 9th place would not have been my guess.” 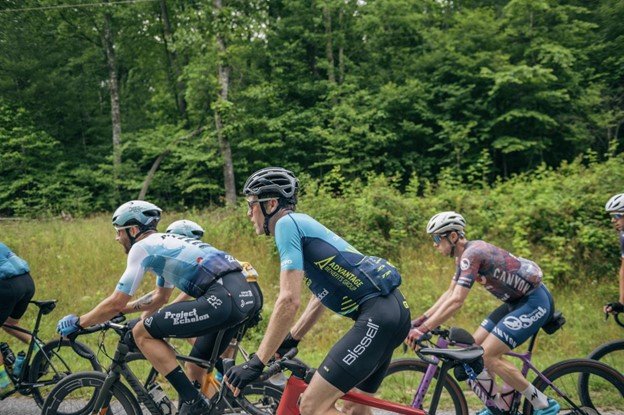 Overall, it was an impressive display of fitness and determination to come back from such a setback mid-race. “All in all, I am happy with how I salvaged my day.  I realized too, it’s other people that ultimately help the most during bad times,” recounts Griffin.  Much has been said about the “Spirit of Gravel” recently, for Griffin, “The gravel community is quirky, but it’s also one of the coolest groups to have the pleasure of battling and making memories with.” 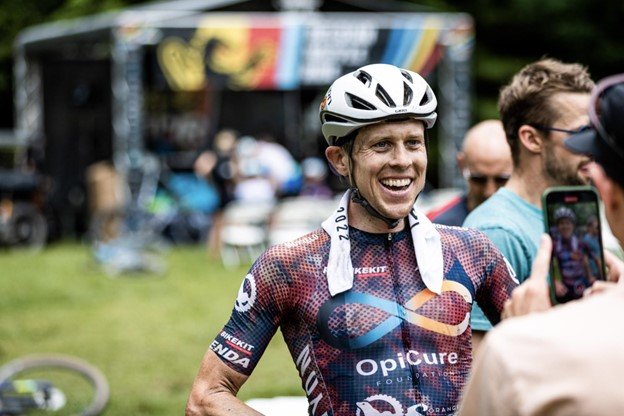 Although not contesting the win, Lucie’s story is of no less importance. As Griffin is at pains to tell us: “more exciting than my own result, is that Lucie once again showcased her grit and determination finishing 8th place in her age category. Once again showing that the bicycle is an incredible tool to help on the road of recovery from opioid use disorder.”

Lucie recounts sitting outside post-race, while having the best burger and fries of her life, the happiest, funniest, and most peculiar moments of the day. 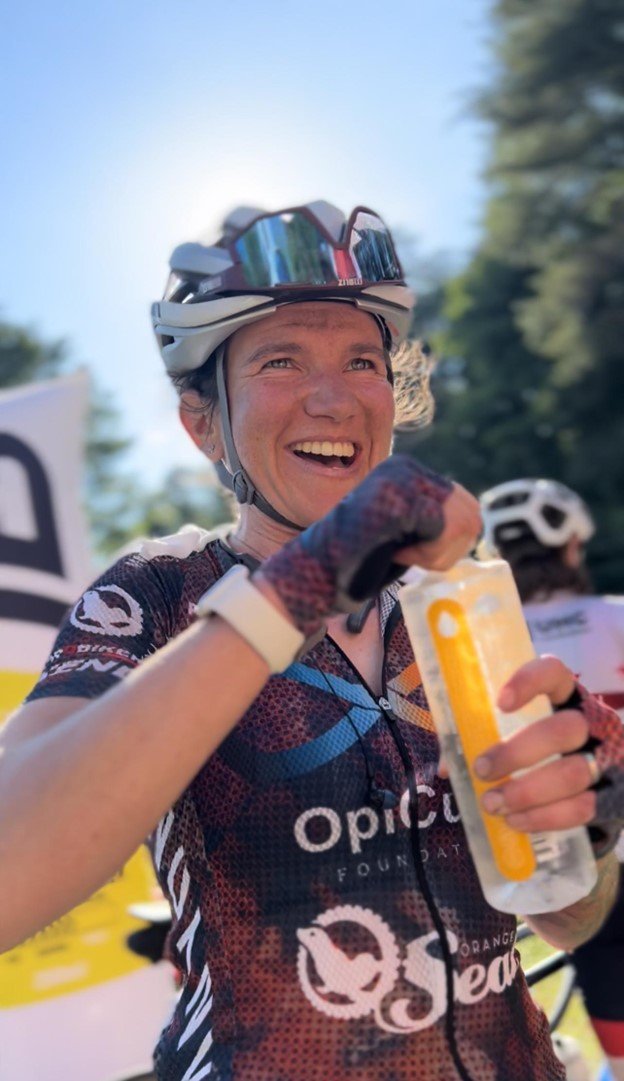 Happiest moment: “Throughout the day, I had the feeling of being back home, cycling the small roads of the French backcountry, the grass, the trees, the farms. I haven’t been back to France in a while, and cycling those windy, country roads took me there.”

Funniest moment: “At the end of the second loop, on the long road climb—with a Flemish name that’d score big in a game of Scrabble—I went past a family cheering who shouted at me ‘you’re the only one we’ve seen smiling on this climb!’ Yes, the BWR is hard, but however hard it is, it reminds me of how grateful I am for the opportunity that’s been given to me by the OpiCure Foudation and their supporting partners, and how lucky I feel to be able to do what I love most in such an awesome setting.”

Most peculiar: “After looking up the word, I would say the loop situation, arrows and all! ‘Where do I go? … Am I on the first or second loop? … Does it ever end? … I’m sure that was the hardest sector— it’s gonna get easier—well I guess not just yet!’ But as hard and peculiar as those loops were, what was rad was getting to ride, for a quick second, alongside the best in the sport that were lapping me! How cool is it to see the favorites pass by like rockets? Really awesome if you ask me!”

The Best Cycling Accessories Under $100

A Closer Look: Are Carbon Wheels The Best Upgrade…