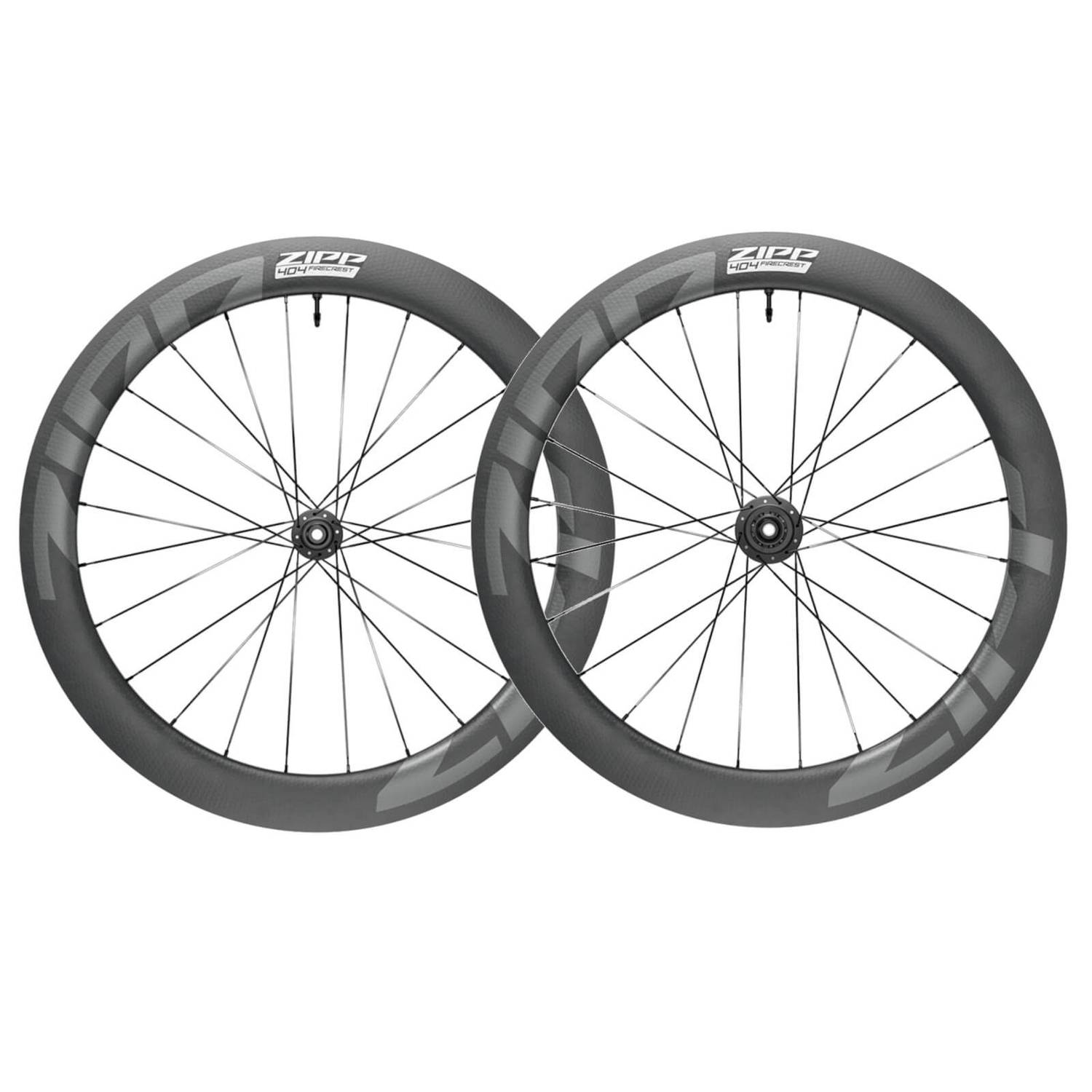 First launched in 2011, Zipp’s 404 Firecrest wheelsets are not only firmly established as one of the fastest wheels on the market, but also they have arguably helped shape the entire category of modern aerodynamic wheels. This iteration, to use the company’s term, is no less than a ‘Speed Weapon’; a ‘weapon’ that boasts a 58mm-deep rim and weighs less than ever at 1470g. It is now cheaper than before, making this a product that’s virtually a no brainer.

Whether you’re looking for a wheelset fit for a Spring Classic, time trial, triathlon, or simply to compete against your mates on the weekend club run, this is an option which is hard to look past.

Whereas the 303 Firecrest is Zipp’s premium all-rounder, which’ll happily serve its rider on or off road, the 404 is all about going fast. Somewhat unusually, the company aren’t claiming to have made a more aerodynamic rim, quite the opposite. As the rim is wider, the shape is actually less aerodynamic than the previous version. However, a multitude of other enhancements — what has been termed Total System Efficiency (TSE) — has enabled the developers to produce a faster-overall wheelset. In addition to examining how wind resistance affects the wheels, the effect of gravity, rolling resistance, and vibration losses have also been tested.

Notably, the internal width of the rim is now wider at 23mm, and has been optimized for a tire of 25–28mm — depending on rider size. This allows the tire to be ran at a lower pressure and in turn means it can roll more smoothly over imperfect road surfaces, increasing efficiency and making for a faster wheel overall. The weight of the wheelset has also been reduced, increasing its speed and lessening the impact of gravity when going up-hill. All this adds up to a wheel that is faster on varied terrain and ever-changing riding conditions.

Hookless rims are slowly becoming the de-facto choice for wheel makers, at least in the high-end wheel space. What this means is, instead of the traditional ‘hook’ on the inside of the rim, the wall is straight. This comes with a number of manufacturer-claimed benefits. For one, with a hookless rim, the transition between the tire and rim is less abrupt, which helps to cut a cleaner shape through the air. As well as the performance benefits, hookless rims are also cheaper, easier, and more environmentally friendly to produce, all of which amounts to cost savings for the buyer.

Spinning the wheelset is an all-new, German-engineered, versatile and durable hubset. Using a six-pawl freehub, with 66-point engagement, the hub has a pick-up angle of 5.45 degrees so that when you put the power down, it’s translated to forward motion almost instantly.

Overall, if you are looking for just one wheelset for road riding, be that for racing or simply for fun, then the 404 Firecrest is a difficult option to look past.

Having some 303's on my bike already I was keen to get the 404's on, absolutely no issues with crosswinds, they get up to speed really well and accelerate during sprints. Was expecting them to feel a bit more sluggish compared to the 303's on climbs but total opposite. Really impressed, no issues with tyre fitting or sealing. Keeping them for racing.

Zipp's stunning update to the 404 Firecrest

I bought the new 404s as a bit of an impulse and PB's rather appealing range of intererest free options. However.... I absolutley love them. Easy to set up, look the nuts and roll so smooth and comfortably. I have similar depth Enve 5.6 and the Zipps are almost as good for half the price. I also swap between the new 404s and Enve 4.5AR on my endurance bike - and the the Zipps with 25c tyres feel just as smooth and comfortable as the 4.5ARs with 28c. Looking forward to trying 28c on the 404 too. Bit of an impusle purchase, but what a bargain. love 'em.

These wheels are light compared to what I had previously and sturdy. Tubeless setup was easy. I mounted 28 mm Pirelli P Zero Race TLR SL. I can feel some improvement on ride quality over my previous setup. Kudos for PBK for having the best price for quality product. And the wheels are in STOCK!!!

These are the best disk brake carbon wheels I’ve used. Big improvement over the previous 404 NSW’s I had, and numerous Hunt wheels. Set up with 28mm Conti gp5000s TR’s were done by hand, and a track pump - easiest tubeless set up. On the road they’re perfect. Light, super fast and great on the climbs for the depth. Ultimate wheelset, and the price and service at PBK is the best around.

The price is awesome for those top quality wheels!!!! No one has better price!